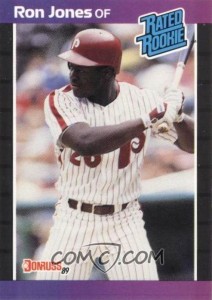 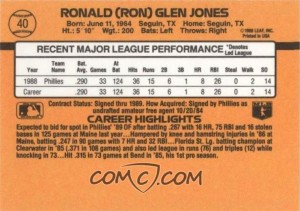 The 1989 Donruss cards were so cheap and so plentiful and so worthless that I grew to hate them.

Cards from the 80’s were all about bold, bright colors, but the late 80’s added gradients. Donruss incorporated one across the top and bottom of their 1989 cards. It looks OK, I guess, but there was the common problem of vertical off-centering. It was very obvious when a card was miscut. Another quality control issue were the black bars on either side. Sometimes they had a matte finish, sometimes they were glossy. And the cards were also pathetically thin. The slightest bit of humidity would make the cards curl. They looked and felt cheap.

And Donruss (named for founders Donald and Russell Weiner) had a pretty crappy record when it came to selecting Rated Rookies. They got a few right, but Alex Sanchez? Eric Gunderson? Paul Marak? Steve Chitren? Terry Bross? How did they pick these guys?

Jones was stocky and muscular. Never saw him play, but just by looking at the pictures, I imagined that he could hit the shit out of the ball.

Jones was born and raised in the small town of Seguin, Texas, just east of San Antonio. As a kid, he played tailback for the Texas Youth Football Association Seguin Steelers.

In 1982, the 18-year-old Jones was drafted by the Toronto Blue Jays in the 14th round, but he refused to sign. The following year, Montreal selected the outfielder from Wharton Junior College with the 42nd overall pick. Once again, Jones refused to sign. The Phillies wound up signing him as an undrafted free agent in 1984.

Jones was not exceptional in the minor leagues but showed a lot of power when he was called up in 1988. I, of course, extrapolated the numbers and expected him to be the next Babe Ruth.

He started 1989 with the Phillies. Only 12 games into the season, Jones ran full-tilt into the unpadded fence at Shea Stadium and busted up his right leg. He was lost for the year. Jones was asked if he had learned anything from four months as a spectator:

I’ve learned I don’t want to go through this again.

Only 24 games into the 1990 season, Jones’ other knee blew out, this time at Veteran’s Stadium against the Astros. On a line drive by Houston’s Franklin Stubbs, Jones broke back and then came charging in when his left knee buckled and he collapsed to the ground. Jones had surgery to repair a torn patella tendon and torn lateral meniscus in his left knee.

This injury, for all intents and purposes, ended his career. He fought back and played in 28 games in 1991, but his legs just couldn’t hold up.

Jones played Mexican League and Independent League ball for another nine years and hit very well, but he never got a chance to play in the majors again. He quit the game after the 2000 season.

In 2006, the 41-year-old Jones was found dead in his apartment from an apparent “brain bleed”. I was really sorry to learn that.