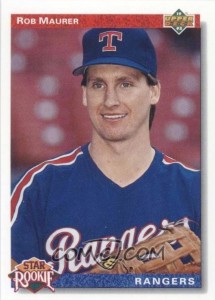 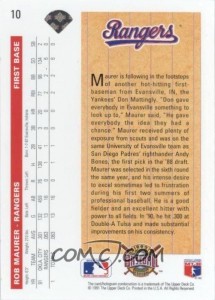 It’s kind of a goofy portrait, with Maurer looking just off-camera with dead eyes and a plastic smile. It’s not the exciting action shot you’d want to see for a rising star. His hat looks very new and stiff, like a fresh purchase from the souvenir shop.

The 1992 Upper Deck set had a nice, simple design, though the drop shadow screams 90’s.

I like the little blurbs they wrote about each player on the back of Star Rookie cards. In the days before the Internet and with little media attention paid to the minor leagues, this was often the only way you could learn about these players.

A kid from Evansville, Indiana, Maurer was drafted by the Texas Rangers in the 6th round of the 1988 Major League Baseball Draft.

Maurer became one of my future stars after quickly making his way up through the Rangers minor league system, doing well at every level. But in brief appearances with the Rangers in 1991 and 1992, he didn’t impress. On top of that, he was a first baseman and blocked at the position by Rafael Palmeiro in his prime.

In the end, it didn’t matter. Knee problems forced him to sit out the 1993 season. He played half a season in the minors in 1994 and did well, but that was it. Bad knees suck.

No idea what he’s up to now. With Google, I found a carpet cleaner, a doctor, a lawyer, and inventor, a painter, and a guitarist named Rob Maurer. But not this guy.