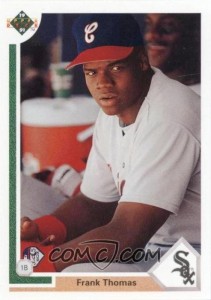 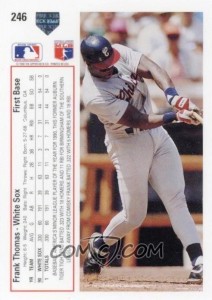 A giant of a man and a huge hitting prospect, and the best you can get is a shot of him on the bench looking confused? One of the quirky things about this photo is that it looks like he’s giving us the finger. The other quirky thing is a mustachioed, smiling Sammy Sosa in background.

The back shows Thomas’ awkward, ultra weight-shift swing. He hit for power because he was so large, not because his swing was efficient or compact.

A multi-sport star in high school, Frank wanted desperately to play professional baseball, but he was not drafted in the 1986 amateur draft.

“I was shocked and sad,” he recalled in the Chicago Tribune. “I saw a lot of guys I played against get drafted, and I knew they couldn’t do what I could do. But I’ve had people all my life saying you can’t do this, you can’t do that. It scars you. No matter how well I’ve done. People have misunderstood me for some reason. I was always one of the most competitive kids around.”

Frank went to Auburn to play football and baseball. He was considered for the 1988 Summer Olympics but was cut.

After graduating, the Chicago White Sox selected him with the seventh pick in the first round of the June 1989 Major League Baseball Draft. He tore his way through the minors and took his place as one of the best hitters in the game in 1990 at the age of 22.

Surprising for a guy his size, Frank’s specialty was getting on base. In the first half of his career, he was among the league leaders in walks and OBP every season. His strike-shortened 1994 season would go down as one of the best hitting seasons ever.

Enamored by Frank’s numbers, I started collecting his cards. One day, I wrote him a letter, asking him to sign a card and suggesting that he forget getting on base and spend a season trying to hit as many home runs as he could. I thought he might be capable of breaking the single-season record. I bought a giant Big Hurt poster for my room, but my brother made fun of me, so I took it down.

His decline started in 2001 at the age of 33. A torn triceps knocked him out for most of the season, and when he returned, he was never quite the same. For the rest of his career, Frank struck out more than he walked and hit for a significantly lower average. He played a bit with Oakland and Toronto before hanging them up in 2008 at the age of 40.

His cameo in 1992’s Mr. Baseball was awesome, but Frank never seemed to have a whole lot of personality, and I don’t think he ever became the team leader that everyone wanted him to be. He just kept hitting.

Currently, Frank Thomas serves as CEO and Founder of W2W Records, a label based in Las Vegas. He also distributes Big Hurt Beer, a beverage that combines All-Star Taste with a smooth finish.