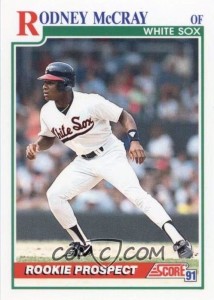 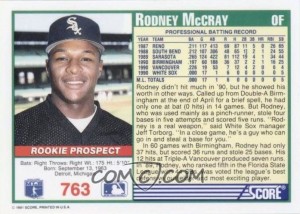 As wonderful as the 1988 Score set was, by 1991, they were the trash of baseball cards. They were really cheap, their cards didn’t have much value, and the design was really basic. The drop case “R” looks really poor, and I am not 100% sure what they were trying to do there.

What I didn’t remember was just how big the 1991 Score set was. McCray’s card was #763. Most sets from Donruss and Fleer in that time frame were in the 660 card size. Only Topps and Upper Deck really went to the 800 card sets. Score decided in 1991 to bump that size to 900.

I always thought McCray looked confused on the front of the card, like he was trying to gather what was going on in front of him before he made a decision on what to do next. On the back of the card, McCray looks to be a likable player. There is a slight hesitation in his smile that makes me think that right before the photo the front office told him he was being sent back down to AAA next season.

McCray was drafted four times starting in 1982. He finally signed with the San Diego Padres in 1984. The issue for McCray is that he couldn’t really hit. He was excellent at getting on base, though, and was fast enough to steal some bases in the minors. His defense was excellent by all accounts and he had a very strong arm.

By the time I met McCray, he was a 28-year-old outfielder on his third franchise. For a brief time in 1992, I was a batboy for the Tidewater Tides (the AAA farm team for the New York Mets). It was a sucky job. Not very fun, and I quit after two weeks. The pay was horrible. You made $12 a game and had to be at the ballpark for eight hours on game day.

That being said, being around the players was fun. The nicest of all of the players was Rodney McCray. He signed probably close to a dozen of these cards for me. He gave me his playing spikes when he was called up the New York Mets. I played in those blue spikes for two years in high school.

Most people will remember McCray for running through the outfield wall in Portland in 1991. ESPN ranked it as the 7th best sport blooper of all-time, and The Best Damn Sports Show Period ranked the incident as their number one Top 50 Devastating Hits in sports history.

I think two things really hurt McCray’s baseball career. The first thing is he couldn’t hit, and in the mid-80’s, general managers and front-offices still looked at batting average over on-base percentage. McCray could get on base, but could never hit for a high average. This resulted in him being 26 before he even made it out of A-ball despite on-base percentages of .371, .354, .414, and .410 at that level.

I think the second thing that really hurt him is he wasn’t a very good base stealer. He stole a lot of bases, but he was also caught an incredible number of times.

Currently, per Wikipedia, it looks that McCray is a base running and outfield instructor for the Los Angeles Dodgers.