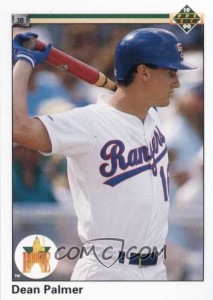 Palmer’s holding a Bratt bat over his shoulders, and he’s shown in profile. It’s kind of cool. Not the action shot you’d want for an up and coming star, but it works. His uniform is nice and clean.

The card design of 1990 Upper Deck is pretty plain, though. Just not much to it. The back has a misspelling (“perminant” instead of “permanent”). Did they not have spellcheck (or editors) in 1990?

I probably have more of this card than any other in my collection. I had read in a magazine that Palmer had more long-term potential than Scott Coolbaugh for Rangers at third base. So I stockpiled the cards for cheap. They were right, Palmer WAS better than Coolbaugh, but not good enough to return on my investment. The cards are as worthless now as they were back then.

Palmer began playing in the Rangers organization in 1986 at age 17. He was immediately nothing special.

In 1989, he made his major league debut and sucked hard, but he’d become a decent hitter a few years later. In 1995, he swung so hard that he ripped his biceps tendon off the bone. An injury facilitated by steroids, I’d guess.

One day in the 90’s, he showed up to the field at Florida State, where my buddy was groundskeeper. With a metal bat, my buddy says he was hitting balls about 600 feet into a parking garage next to the field.

He bounced from Texas to Kansas City to Detroit. With a series of nagging neck and shoulder injuries, Palmer retired following the 2003 baseball season. He attempted a comeback with the Tigers in 2005 spring training, but failed to make the team.

Palmer now is the assistant coach at Lincoln High School in Tallahassee.