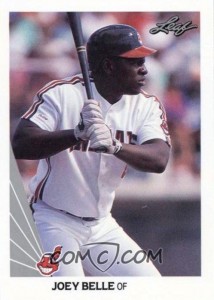 Donruss used the Leaf brand from 1985 to 1988 for cards distributed in Canada. Despite their relative rarity and the fact they were almost visually identical, Leaf cards were even less desirable (if that’s even possible) than the standard Donruss offering. In 1990, Leaf was rebranded as an independent high-end issue to compete with Upper Deck in the emerging premium card market.

The 1990 Leaf set was very popular for it’s newness, card quality, and perceived scarcity. An exciting class of rookies also helped make this and pretty much all the 1990 sets more exciting to collect.

With it’s neutral white-gray color scheme, minimalist design, and nice-looking backs, the cards were a welcome departure from other ugly and cheaply made sets of the time. The card stock was impressively thick and the images we of high quality, but a closer look at the photography of the set as a whole shows mostly traditional poses without much personality.

On this particular card, Belle’s expression is somewhere between needing to sneeze and needing to take a shit. The headshot on the back is decidedly more pleasant. His faint smile and droopy eyes make it look like he just took a bong hit. Also notice the difference in skin tone between the two images.

Unbelievably, Belle was a Boy Scout who attained the rank of Eagle Scout. In high school, he was a star baseball and football player, a member of the National Honor Society, and vice president of the local Future Business Leaders of America. He graduated sixth in his high school class.

After a successful baseball career at LSU, Belle was drafted by the Cleveland Indians. He shot through the minor leagues, hitting for average and power at every level. He made it to the Indians in 1989 at the age of 22.

Born Albert Jr., he was known as “Joey” (his childhood nickname) in the minors, and his earliest baseball cards bear this name. After undergoing counseling to address his temper and excessive drinking, Belle preferred to be known as “Albert.”

Belle always seemed angry. I felt like he took all his aggression out on the baseball with that awkward-looking swing. And he could hit the ball pretty damn hard. But his career was marked by controversy, fights with fans, unpleasant interactions with the public, and a disdain for the media. Buster Olney, then of The New York Times, wrote:

It was a taken in baseball circles that Albert Belle was nuts… The Indians billed him $10,000 a year for the damage he caused in clubhouses on the road and at home, and tolerated his behavior only because he was an awesome slugger… He slurped coffee constantly and seemed to be on a perpetual caffeinated frenzy. Few escaped his wrath: on some days he would destroy the post-game buffet…launching plates into the shower… after one poor at-bat against Boston, he retreated to the visitors’ clubhouse and took a bat to teammate Kenny Lofton’s boombox. Belle preferred to have the clubhouse cold, below 60 degrees, and when one chilly teammate turned up the heat, Belle walked over, turned down the thermostat and smashed it with his bat. His nickname, thereafter, was “Mr. Freeze.”

During a game in Belle’s banner 1994 season, White Sox manager Gene Lamont challenged that Belle was using a corked bat. Umpire Dave Phillips confiscated the bat and locked it in the umpires’ room. During the game, Indians pitcher Jason Grimsley scrambled through a crawlspace above the ceiling and switched Belle’s bat with Paul Sorrento’s, a fellow teammate.

The Indians were ordered by the American League to produce Belle’s original, unaltered bat. Eventually, the bat was sent to the MLB in New York where it was x-rayed and then sawed in half in the presence of Belle and Indians GM John Hart. The bat was found to be corked and Belle was suspended by the AL for 10 games.

In 1995, Belle led the league in home runs, doubles, runs, RBIs, and slugging percentage but narrowly lost the AL MVP award to Boston’s Mo Vaughn. Belle’s temperament, disdain of the media, and allegations of using corked bats surely cost him the votes he needed to win. He said:

If you ask every reporter who voted, they knew they should have been voting for me. It should have been the greatest landslide in MVP history. Just because some of them didn’t like me … they didn’t vote for me.

When looking at his numbers from the mid-90’s, the height of the steroid era, it’s easy to say that he did them. But aside from the numbers he put up, there’s no real evidence that he did.

After leaving the Indians, he signed a Chicago White Sox contract with an unusual clause requiring that he remain one of the three highest paid players in baseball. In October 1998, he invoked the clause, and when the White Sox declined to give him a raise, he became a free agent. A $65 million contract with Baltimore would again make him the game’s highest paid player.

Despite indications that he could still hit, degenerative hip osteoarthritis forced Belle to retire in 2000 at the age of 34. He homered in the final at-bat of his major league career, at Oriole Park at Camden Yards on October 1, 2000.

Today, Belle lives in Scottsdale, Arizona. He claims to have calmed down a little bit:

I’m 46 now, compared to when I was 26, so I’m pretty mild-mannered. I’ve got a wife and kids and stuff. It’s a different personality now.

But the reputation from his playing days still lingers, and it’s unlikely he’ll ever get voted into the Hall of Fame.